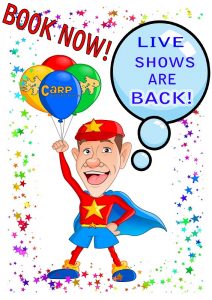 Carp Productions have been entertaining children and charming audiences in Melbourne and throughout Victoria for over fifteen years, presenting their distinct and unique brand of performances to audiences all over Victoria.

Carp was formed by Caroline Smart and Philip Linsdell, who brought with them years of Theatre-in-Education experience, as well as teaching, directing and writing skills.  Versatile and committed to quality performance, Caroline and Philip have continually added skills over the years, including magic, singing and dancing, face painting, balloon modelling and many others.

With Carp Productions shows, the performance is inclusive – the audience is part of the experience, not merely onlookers.  All Carp performances include an element of audience participation, both in the form of actions and lines of dialogue for the entire audience, and inviting volunteers from the audience to join the actors on stage and play roles in the show.  Carp devote themselves to making each and every child’s experience on stage a rewarding and positive one.  It’s easy to bring a child up on stage, stick a hat on them and use them as window dressing – anyone can do that.  But to make the child part of the show, to respond to what they give and to give them the chance to take the performance to a new place for a moment – that takes something extra from the actor.  Years of experience and a dedication to this philosophy by Caroline and Philip have contributed to making this method of audience participation appear seamless and fun

What this all means is that every Carp performance, whether a large-scale production in front of 600 children, an educational performance for schools, a gentle show for 20 pre-schoolers seeing their first live show, a library performance for all ages, or a children’s party, will have that element of infectious unpredictability, that sense that anything could happen but nothing can go wrong.   And over and above all that, Carp measure the success of their performances by how much their audiences laugh.  Performances ought to be slightly silly, a little ridiculous, the audience ought to walk away with a smile on their face and lots to remember.  That’s what Carp provide.

Carp have performed in all sorts of environments, from schools in Echuca to the Warrnambool Fun4Kids Festival, the Queenscliff Music Festival and Federation Square.  They taught dramatic techniques to primary school children for a number of years.  They devised a Human Rights Show, “Fred’s Fair Play”, produced by the Eastern Community Legal Centre. Thousands of Fairies flocked annually to the Fitzroy Gardens to see their magical show “The Fairy Factor” which they performed for the City of Melbourne every January from 2003 until 2008. The Wheeler Centre invited them to perform at the Children’s Book Festival Family Day, held at The State Library.  No challenge is too big for them, no audience too large or too small.  A constant comment they receive is variations on “I’ve never heard the children laugh so much!” or “It’s amazing how you can hold their attention for so long!”

Come and see a Carp show next chance you get, or invite them to your school, pre-school, holiday or library to perform, and see what the hype is all about!